In this blog post, I’ll recount my experience building a CLI application in Elixir . I needed to build a CLI for Intention , a web app for goal tracking that I wrote last year. The CLI wasn’t very complicated - it just needed to authenticate, then call a couple of HTTP endpoints in Intention’s backend API and show the results. This will be a fairly high level overview, if you’d prefer a more detailed step by step guide, I’ve linked to a couple at the bottom of the page.

I use Clojure for my day-to-day work, but I wanted to try out a different language. Also, Clojure’s slow startup time makes it slightly suboptimal for CLI applications.

I initially decided to try Haskell . I’d previously only written a few small scripts in Haskell, and was eager to see how I fared writing a full application. Unfortunately, to my despair I quickly found myself bogged down in type errors. I quickly abandoned Haskell after realising that either it’s too hard to use for small applications, or that I lack the necessary brainpower to use it properly.

I started looking instead for a suitable dynamically typed language. I found this in Elixir , a dynamically typed, functional language with a Ruby style syntax. It runs on the Erlang VM (BEAM) and has been going since 2012, so it’s a stable and fairly mature language. The Erlang VM starts up very quickly, so it’s a good fit for CLI applications. Elixir also has a nice interactive REPL (IEx), plus a few features inspired by Clojure such as macros and protocols. All this made the language very appealing, so I decided to give it a go.

Elixir’s build tool is called Mix . Mix manages your project’s dependencies, compiles your application, runs tests, and can generate new project skeletons. To get started, all you need to do is install Elixir and Mix, then run mix new [application name]. This generates a basic project structure like this: 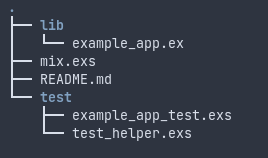 You can then start a REPL by running iex -S mix, and run some commands:

Now I had a project set up, I needed a way of parsing command line arguments. I wanted to handle commands like intention login and intention list --all. I used the excellent Optimus library for this. Optimus made it dead easy to set up multiple subcommands, each with their own allowed arguments and help text. Straight out of the box, it handles invalid commands, displays errors, and provides --help and --version options.

To get started, it’s as simple as calling optimus = Optimus.new!(...), then Optimus.parse(optimus, args). Here’s my (slightly shortened) argument parsing code:

And here’s what you get when you run intention --help: 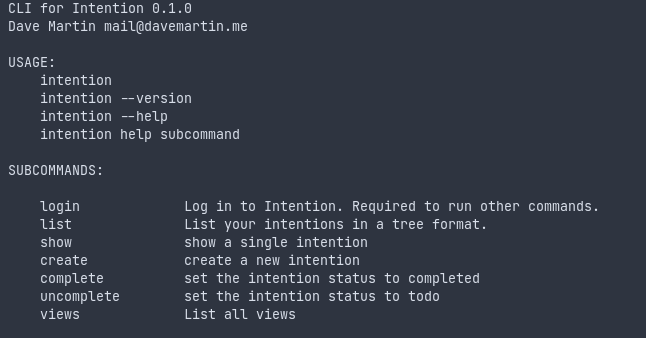 My next task was to figure out how to make HTTP requests to Intention’s JSON API. Luckily, this is very simple in Elixir. I used the HTTPotion library for making the actual requests, plus the Jason library to parse the response JSON. Making a request can then be done like so:

This works well when the request succeeds, but what about when it fails? The request may fail due to a bad WiFi connection, because the authentication token is invalid, or perhaps because the response body is not valid JSON. Elixir has a try/catch mechanism for error handling, but it’s also common for library functions to return error tuples in the format {:ok, value} | {:error, reason}. As in other languages which take this approach, it can be unclear when to use which mechanism. I’ve found this is especially true when dealing with HTTP requests - should a 500 response trigger an exception, or be returned as {:error, "error response"}?

I decided to use error tuples as much as possible. To help me with this, I used the OK library. OK provides some very useful macros for working with error tuples, most notably:

I found taking this approach simplified my error handling code. However, due to Elixir’s dynamic typing you do have to be careful to use it correctly. It’s very easy to accidentally use ~>> instead of ~> or |>.

As an example, here’s a handle_response function I wrote for handling HTTP responses:

Most CLI apps need a way to nicely format their output. For this, I used Elixir’s built-in IO.ANSI module. Using ANSI sequences allow you to do basic text formatting, like outputting bold or coloured text. I also used the cli_spinners library to show some fancy loading spinners. Both modules are pretty straightforward to use. Here’s an example code snippet, that shows a spinner while waiting for the user to log in:

Now we come to the final piece of the puzzle - how do you bundle your code into a distributable application? Handily, Elixir comes bundled with the escript utility for this. You simply put your code in a main function, add an escript field to your project’s mix.exs, and then run mix escript.build. This will create an executable file. The only caveat I found is that you need the Erlang VM installed to run the resulting executable. I tried out bakeware and burrito to get around this, but unfortunately neither of them seem to play nicely with my OS (NixOS) and I couldn’t get them working.

(these aren’t my real goals by the way 😛)

I really liked working with Elixir. I found it easy to get started, IEx is great, and the overall language is well designed and intuitive. If you’re using Emacs, Alchemist gives you some fantastic tooling, including an integrated REPL. I’d definitely use Elixir again for writing a CLI app. I’d also like to try out Phoenix , a Ruby On Rails style web framework for Elixir. LiveView in particular looks very interesting. If you’re looking to try out a new language, I’d highly recommend Elixir. Thanks for reading!