First off, welcome to my brand new blog. I’m a Clojure programmer by day, so this blog will focus pretty much entirely on Clojure (as you probably guessed from the name). My main aim with this blog is to document step-by-step solutions for any difficult, or rare, problems I come across.

I was inspired to start the blog by a post on Medium. The post talks about how Clojure can be hard for beginners, due to the lack of step-by-step guides for common problems. It’s from the point of view of a Clojure beginner, but I believe a lot of it applies to any Clojure programmer, no matter how experienced. I’ve been learning Clojure for a few years, and when I have a problem I still often find myself sifting through Google Groups/Clojurians Slack/GitHub issues for different bits of the solution, then attempting to put all the pieces together into something that works for me. This can be quite difficult, especially for beginners, and sometimes it’s preferable to just follow an opinionated tutorial.

One thing I struggled with recently is making a cheap Datomic setup, so I thought this would be a good subject for my first post.

Datomic is an immutable database, created by Rich Hickey and Cognitect. I want to focus on how to get Datomic up and running, so I’ll assume you know a bit about Datomic and how it works. I won’t go into detail about how it works, or why you should use it (but you definitely should). If you’ve never heard of Datomic before, and you want to learn more about the philosophy behind it, and the problems it solves, I’d recommend watching Rich Hickey’s talk “Database as a Value” - if that doesn’t convince you to use it, nothing will.

First, some background. I had been writing an app, the backend of which used Datomic. The app wasn’t quite ready to be released, but I wanted to set up a very basic production-like environment for testing. I was therefore looking to run Datomic cheaply, but in such a way that I could scale it up without too much effort. This ruled out running Datomic in dev mode.

(EDIT: Dustin Getz pointed out to me that it’s alright to use dev mode when you’re just starting out with Datomic. However, when you want to scale your application, you’ll have to backup your data, create a full datomic instance, then restore your data to that)

I initially tried using the scripts bundled with Datomic, which create and run a CloudFormation stack on AWS. However, I found after less than a month that I’d been billed over $45. I then tried using Datomic Cloud instead, but I again found it was quite expensive - I was charged $20 for less than a week. When you’re just starting out with an app, you don’t want to be paying this much (or at least I didn’t). I therefore set out to create a more “affordable” Datomic setup.

Datomic is a bit different to most databases, in that the underlying storage is completely decoupled from the process which writes to it, called the “transactor”. I wanted to run the transactor in a Docker container, for a few reasons:

Luckily, we don’t have to build a Docker image from scratch, there’s a base image on GitHub, courtesy of PointSlope.

I looked at several platforms for Docker container hosting, including hyper.sh and sloppy.io. Since the base Docker image above requires a minimum of 1GB or memory, I needed more than 1GB of RAM, which would’ve cost around $15-20 per month. It actually worked out cheaper to rent a whole virtual machine, and run a Docker container on it. The platform I eventually landed on was DigitalOcean. A VM (droplet in their terminology) with 2GB of RAM costs $10 per month, plus they give you $100 credit to get started.

You have several choices of underlying storage. You can use AWS’s DynamoDB, any SQL database or Apache Cassandra. I decided to go with PostgreSQL, because there are plenty of cheap hosting options. I went with Heroku Postgres, because I was already using Heroku, and they have a free tier. I’ve never used any other hosted SQL service, so I can’t recommend any others, but there are plenty out there.

Note: when you see something in square brackets (like “[db host]“), you need to fill it in

A Postgres instance should now be running. We’ll need the connection details when we set up the Datomic transactor, so let’s note them down now. On Heroku, go to your app, then the “Resources” tab, then click on “Heroku Postgres”. 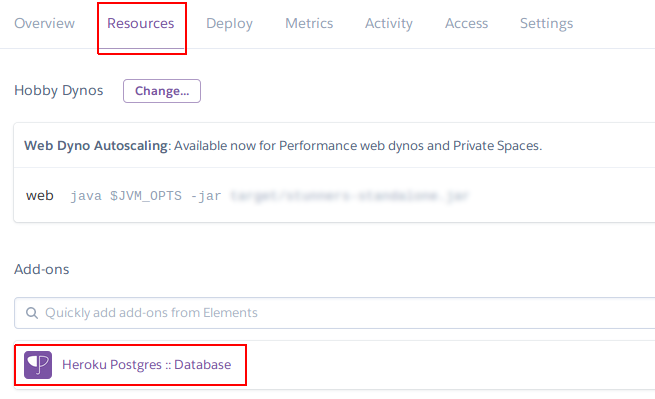 Initialising the DB for Datomic

Before we can use our DB with Datomic, we need to set up a table that Datomic requires, datomic_kvs. To do this, follow these steps:

In this step, we’ll create a Docker image for our Datomic transactor, using pointslope/datomic-pro-starter as the base image.

For security, it’s recommended to set up SSH keys to access your droplet, rather than using a username and password. If you want to do this, just follow this guide.

Congratulations, you’ve now got your own instance of Datomic running in the cloud! Now you just need to add it to your app.

Using Datomic in your app

There are 2 possible APIs you can use with Datomic: client or peer. I’ll use the peer API here, mainly because it’s slightly easier to get started with.

(If you would prefer to encrypt these credentials, follow the guide in the Leiningen docs)

(Note that the Datomic DB name can be whatever you want.)

That’s it! You now have a connection to your Datomic DB.

Where to go from here

If you’re new to Datomic, have a look through the official getting started guide. You should also check out Day of Datomic, and Learn Datalog Today.

I hope you’ve found this post useful. If you’ve spotted any inaccuracies (euphemism for “glaring security flaws”), or you’d just like to congratulate me on what an excellent post this is, feel free to email me at dwmartin41@gmail.com. Thanks for reading.